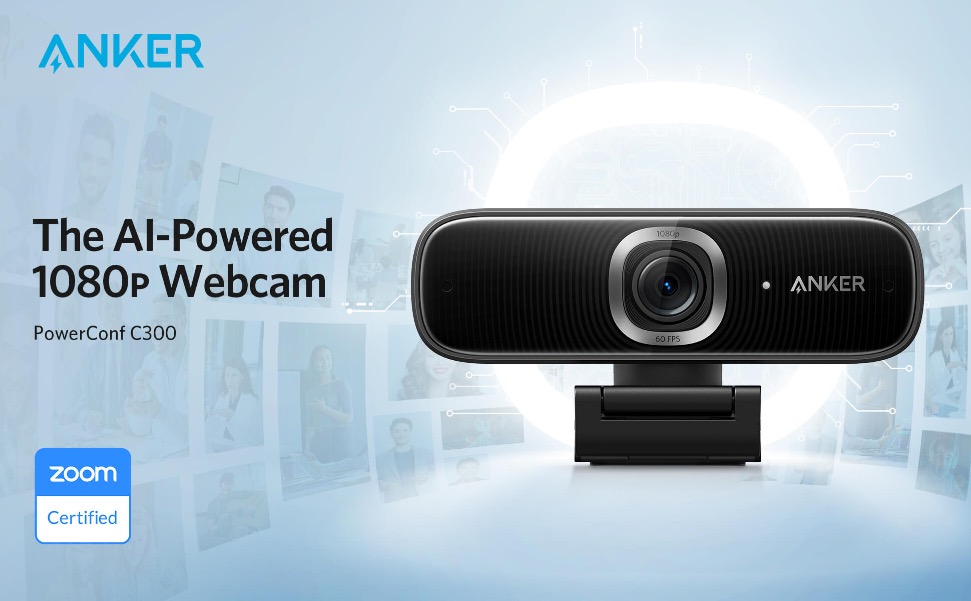 Stand Out in True Color

Automatically balances white and color levels so that you look bright, clear, and professional in front of your clients, colleagues, and bosses.

Fit Everyone in Frame

Adjusts the field of view depending on the number of people in front of the camera.

As soon as you switch on PowerConf C300, the innovative AI chip works its magic to make you look your best. It autofocuses, adjusts the color levels, and much more. All without you having to lift a finger and fiddle with endless menus.

There’s no need to waste time finding the right drivers. Just clip the camera to your laptop or display, plug it in, and start streaming—all in just 3 seconds.

Prevent prying eyes from peeping on you when you least expect it. Snap the privacy cover into place and slide over the lens after wrapping up your meeting.

With 4 angles of adjustment, you can place PowerConf C300 almost anywhere you want. You can even mount it to a tripod for complete control over your camera setup.

Zoom Certified:Evaluated and approved by the latest professional standards of Zoom for picture quality, color, and clarity.

Dual Microphones:The two microphones work together alongside Active Noise Cancellation so callers can only hear your voice, as opposed to distracting background noise.

Adjustable Field of View:Go from up close and personal to fitting everyone in frame all without messing around with settings thanks to PowerConf C300’s automatically adjustable field of view.

Face Tracking:PowerConf C300 puts you front and center of every meeting. The innovative AI chip recognizes your face and auto tracks your movement via the pan and tilt camera.

Auto Low-Light Correction:Look crisp and clear while on-call, even in heavily backlit or low-light conditions.

Privacy Cover:Snap the included privacy cover onto the camera and slide it over the lens to prevent prying eyes from peeking in on your personal life.

Download the App:With the Anker Work app, you can choose from 4 meeting modes to tailor PowerConf C300 to your exact needs. You can even customize your own settings.

We strongly recommend that you go to software.anker.com to download the latest firmware update to make full use of PowerConf C300’s AI features.

This is by far the best webcam you can get in this price range. To find better image quality one needs to spend at least double, but probably even more, and one still would not necessarily get all the features found here.

After using it every day for over a month I find this webcam is absolutely perfect for professional video calls, it's a joy to use every single time.

* low light performance is phenomenal, an order of magnitude compared to the more expensive Logitech C930E which I also own and I used for over a year

* it comes with an excellent app, which works fine on M1 Apple Silicon MacBooks and is updated regularly

* exposure, white balance, sharpness and colour temperature are very good out of the box, but can be further customised in the app

* the anti-flickering function deserves special mention, removing any trace of flickering (which normally is a problem with most LED bulbs)

* the HDR functionality helps somewhat on sunny days, reducing the glow of the windows if they come into the frame

* there is double microphone, which I have not used much, but seems to work adequately in a pinch

* the field of view is ultra-wide, and it's suitable not only for individual use but also for conference rooms; there is an excellent distortion correction, so all the lines in the image are straight despite the very wide angle

* autofocus is fast, accurate and stable, it's the kind of thing that you don't even notice because it's so good

* the killer feature however, the one that wows everyone, is face tracking: this crops the image giving the illusion of a moving camera always keeping your face in an optimal position; to get an idea, it's pretty much identical to Apple's Centre Stage; it has two modes, single person and group; this feature has improved even more after some firmware upgrades, and it's now very responsive and satisfyingly smooth, it's just fun and a pleasure to use; another impressive aspect is that the computation is done on the camera itself, it does not require any driver nor does it use any additional CPU resources: once selected in the app, it doesn't even require the app to remain open (unlike Logitech's customisation features); right now, Sept 2021, to my knowledge the only alternatives on the market are Apple's Centre Stage on the iPads, and the OBSBOT PTZ webcam, but not at this price

In conclusion I must salute Anker's efforts here, both for the hardware but especially the software. I think this represents a turning point for them, they have created something truly unique, which is sure to upgrade video conferencing to a professional level. It definitely shows that they believed in this product and worked hard to make it happen, fully deserving the ubiquitous glowing reviews in the technical news. Well done Anker.

D
Dr. Michael Harris
Excellent!!! Does exactly what it says

Excellent webcam. I’m using 2 of them in different positions in a 5 camera zoom situation. Only minor negative is you can’t change the camera settings while it is in use but a minor inconvenience

Anker makes really good products and even though Anker isn't know for webcams, they really done an excellent job with this webcam.

D
Denis Karpov
Pricey but worth it

My requirements for the picture quality are rather modest, but I was pleasantly surprised by a truly wide angle and how the camera shows the room in low light. Auto-focus seems decent as well. But have to say, I haven't used the camera much yet.
It worked for me out of the box on by Raspberry Pi in Telegram messenger, I didn't have to install any additional software, and didn't have to give any consent for collection of my personal data as Jay from Canada mentioned in their comments. Not saying Jay was wrong. Their note must be the case when you're going to install some auxiliary Anker software on Windows, of course. However, I'm fine with the basic usage.

We use cookies on our website to give you the very best shopping experience we can. By using this site, you agree to its use of cookies.